This edition of our Collector's series looks at 4 new and exciting collectors peices that should not be missed.

Born in Kutakurtal around 1924, Wimmitji Tjapangarti moved to the old Balgo mission in 1943 as a young initiated man. He began painting alongside his wife Eubena Nampitjin when in his 60s, and together they created a unique shared aesthetic 'quite different from that of the other Balgo painters' (Watson 1997: 49). Their early works were identifiably more detailed and refined than works by their contemporaries. As the Warlayirti Art Centre developed during the early 1990s, the two artists began to paint more individually and their works exhibited growing differentiation.

Wimmitji’s paintings are visually complex and contain a vast amount of knowledge within each single composition. The intricacy and textural richness were achieved with spontaneous outpourings of dotting, and myriad surface treatments. The disciplining force is the spiritual dimension of the story, related by a cultural custodian of the highest degree. Wimmitji was a mapan (traditional healer) of unsurpassed knowledge and ceremonial importance amongst the members of the Wangkajunka society. His painting style and earthy palette gave the best of his works a look of great age and this, no doubt, added to perceptions of their authenticity, 'though from his own perspective it would have been drawn from his deep involvement with the law' (Johnson 1994: 209). 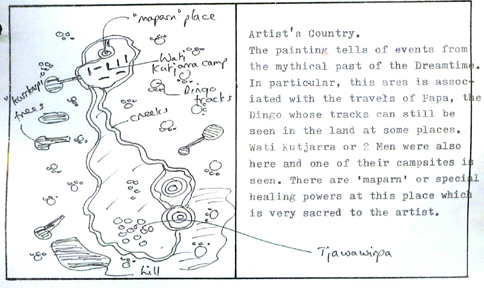 Midpul, more familiarly known as Prince of Wales, was orn c.1938 on the far side of Darwin Harbour. He was a custodian and leader of Larakia ceremonies and dances, a leading didgeridoo player, and practiced art as ceremonial body painting for much of his life. His father, Imabul, was also known as King George and this, perhaps as much as the fact that Midpul danced for Queen Elizabeth during a royal trip to Australia in the 1960s, resulted in his familiar ‘English’ name. ‘Prince’ grew up with his mother’s people, the Wadgigiyn, and spent much of his adult life at the beach camp at Cullen (Kahlin) Bay, now an expensive marina development.

Despite suffering a stroke prior to gaining great recognition as an artist, he continued his lifelong practice and passion for painting and became recognized as the first contemporary Aboriginal artist from the Larakia region. His work is a unique rendering on to canvas of the traditional body designs used in Danggalaba ceremonies.

Gelenggedengbeny
2003
natural earth pigments and charcoal on wood
80 x 60cm
$4,500
Provenance:
Warmun Art Centre, Turkey Creek, WA
Raft Artspace, Darwin, NT
Private Collection, Adelaide, SA
Coo-ee Art Gallery, NSW
Like most old Aboriginal people in the Kimberley, Gija artist Mick Jawalji worked mustering and droving cattle. While working as a head stockman, and renowned horse breaker, he learned about all the places he later depicted in his art. He and his people held ceremonies and practiced law at these places each wet season.

Jawalji started painting in 2001, at first on cardboard and later canvas by experimenting with both ochre and acrylic paints. An important law man, his boards were in high demand from the moment he joined other Gija artists at Warmun in 2002. Jawalji's paintings feature places in his Bangurr country and Dreamtime stories from those places he visited during a lifetime working the cattle routes of the Kimberley.

Provenance:
Mangkaja Arts, Fitzroy Crossing, WA
Tjala Aboriginal Art, Sydney, NSW
Private Collection, NSW
Coo-ee Aboriginal Art Gallery, Sydney, NSW
Born in the Great Sandy Desert (1914), Paji Honeychild lived with her family around  a permanent, spring fed waterhole until the end of the 1950s when she joined her nephew, the late Jimmy Pike at Old Cherrabun Station. Her works were first seen publicly at Tandanya Aboriginal Cultural Institute in 1991. She became the eldest and most revered member amongst a core group of Kimberley artists who gained notoriety during the 1990s with shows nationally and internationally. Her immediate family included Peter Skipper, Jimmy Pike, Jimmy Nerrimah and Cory Surprise. Together they worked on the two major collaborative Ngurrara canvases that documented their land claim. Paji 'grew up' seventeen children although none of them were her own biological offspring.

Paji painted standing, depicting the places that she walked as a young woman with a broad sweep of the brush. The waterholes gradually took over the picture plane with the elliptical forms of the centre of the waterhole, bleeding over the edges. This was precisely the view that she would have recalled from the days when she drew water from the Jila.